Close your eyes. Take a few deep breaths. Relax, sinking back in your chair. OK, that’s enough. When you were experiencing a brief moment of […]

Take a few deep breaths. Relax, sinking back in your chair.

OK, that’s enough. When you were experiencing a brief moment of serenity, parts of your brain switched to alpha brainwaves: big populations of neurons firing together with a frequency of 7 to 13 times per second. Now, as you’re actively focused on reading, alpha activity dropped down again.

What happens in your brain when it generates alpha waves?

The best way to find out about the role of different brainwaves is to give people tasks to do and observe what happens in their brains. Imagine sitting in a sterile lab with some weird hardware strapped to your head and solving tedious mind quizzes (yes, the standard cognitive tasks used by researchers are in fact really boring). Quite possibly, after some time your mind will start to wander off, drifting from one thought to another.

That’s when alpha brainwaves kick in. When people are tested performing tasks while their neural activity is monitored, a clear tendency is visible: alpha waves get stronger when the individuals are daydreaming and weaker when they try to focus.

Alpha waves mainly occur when your mind is not focused on the task you’re doing. All these moments throughout the day when you were supposed to be working but your mind keeps thinking about everything but what your boss pays you to think about – yep, that’s alpha.

It’s all in your mind

Apart from focus, there is one other dimension linked to alpha bandwidth activity: whether your attention is directed outwards or inwards. When you are daydreaming, your mind is withdrawn from the outside world and directed towards itself, as you experience thoughts and memories. This is a domain of alpha brainwaves. But when external stimuli such as light or sound draw your attention towards it, you become focused on the outside world and the alpha brainwaves cease.

That’s why alpha waves occur also during meditation, which usually involves observing one’s train of thoughts. Whether the meditator is keeping an attitude of a mindful observer and letting mental impressions float by or being completely immersed in daydreaming, alpha waves will spike.

If alpha waves occur when you are not actively focused on the task, does it mean that they may hamper your performance?

For some classes of activities, the answer is yes. When the mind is wandering, you have less cognitive control over what you’re doing. In many work environments which require vigilance and focus, this will mean lower accuracy and a bigger risk of failure. You better not increase your alpha waves if you’re a flight controller.

However, if your line of work is a creative one, you may benefit a lot from alpha brainwaves.

Let’s pause for a moment and define: what does it mean to be creative?

There is a class of tasks that require connecting information in a logical way, solving mathematical equations, or just digging through books or the internet. But there is also another group of problems that require non-standard, extraordinary solutions: they force us to harness our creativity.
Both classes of problems demand different mind operations. For tackling non-creative tasks, you basically need three things: time, enough information, and a focused mind. But for creative ones, the focus is not enough. To find non-obvious connections between ideas, your brain needs to engage in some free exploration: to juxtapose different memories together, looking for patterns or inspirations. This is exactly what your brain does when your thoughts are wandering freely. It may also be the probable evolutionary reason for why your brain daydreams: it does it not to make your work time miserable, but on the contrary, to help you solve creative problems. 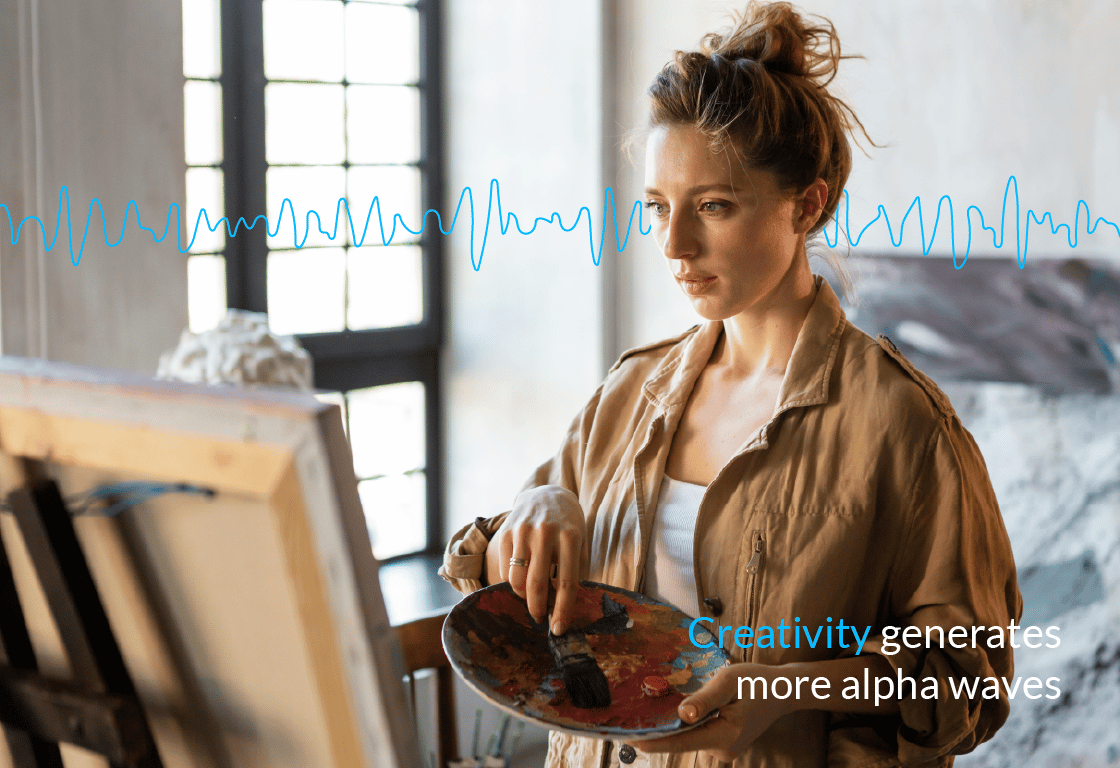 It turns out that these periods when you lose focus, your thoughts wander and your brain generates more alpha waves may be necessary for being creative. Indeed, many researchers observed that alpha brainwaves increase when people are engaged in creative tasks, and that creative individuals’ brains show more alpha activity.

But that didn’t exactly mean that there was any direct link between alpha waves and creativity: after all, those two things occurring together could have been a coincidence. To really determine whether alpha waves have something to do with finding novel solutions, the scientists needed to see what happens if they manipulate the brainwaves.

Does tuning up to alpha bandwidth increase creativity?

It seems it does. A research team from North Carolina treated a group of participants with electric current (tACS) which stimulated their brains towards 10 Hz alpha bandwidth. After this treatment, the participants scored better on creativity tasks. Researchers then checked if using the same method, but with different frequency would yield similar results. It didn’t: only the bandwidth of alpha waves produced an improvement.

What happens if you induce alpha?

So far we know that an increase in alpha brainwaves marks the time then your brain wanders, which may be a good thing if you’re working on a creative problem. What are the other benefits?
Just as the faster beta brainwaves are linked with high activity, the slower alpha bandwidth is associated with relaxation. It means that you can use alpha waves to calm down, which is especially useful at times of stress. In one experiment, a group of people suffering from anxiety disorder received neurofeedback training which increased their alpha and theta waves. After 15 sessions, their anxiety symptoms were reduced.
Increasing alpha waves may also increase memory retention. Studying typically involves bouts of intense focus when you chew through information, after which your brain needs to consolidate new data in long term memory. Alpha waves come in handy for these calmer moments of retaining novel memories.

How to use alpha for your benefit? One of the ways is to train your brain to generate more alpha waves. It could be done using neurofeedback. The idea is simple: an EEG device monitoring brainwaves is coupled with some sort of interface, which could even be an app on your phone screen. When you’re trying to achieve target brainwaves, you get feedback about your neural activity from the setup, which gives you cues when you’re doing it right or wrong.

You can also use non-invasive brain stimulation to drive your brain towards alpha frequency. If you’re using Neorhythm, either use one of the predefined programs such as Quiet Mind Meditation, Meditation for Calming & Synchronisation or Deep Relaxation. To take advantage of alpha in custom programs, pick a frequency between 7 Hz and 13 Hz. 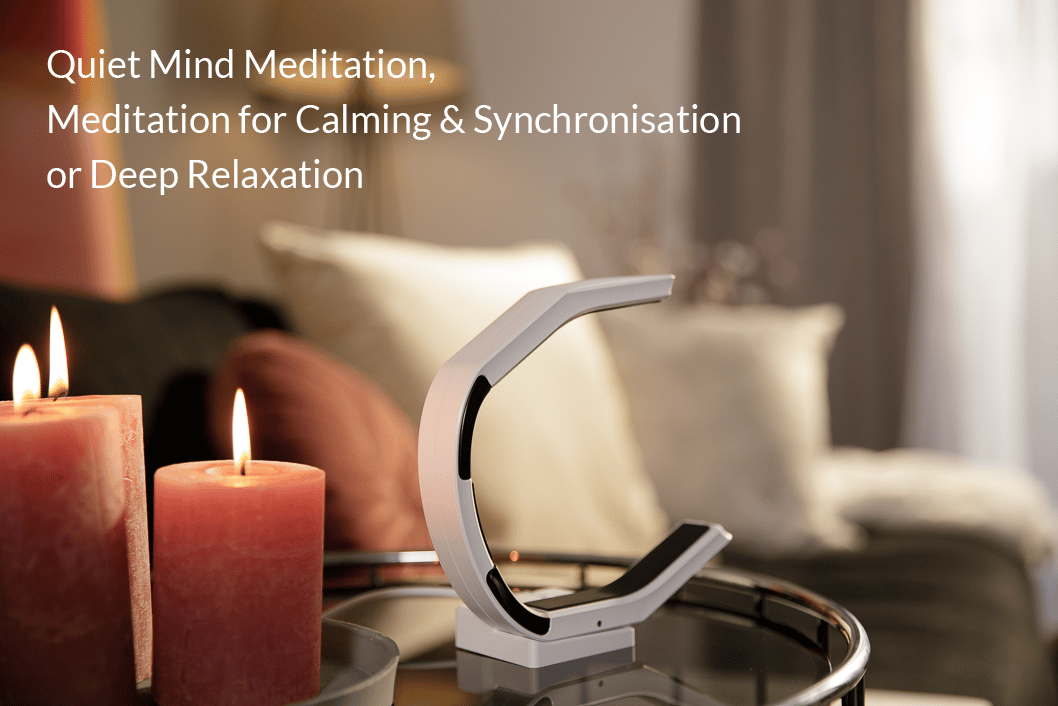