A university lecturer making a passionate speech, a politician engaged in vibrant debate, or a talk show host: what all they have in common are the beta waves.

When someone is alert and fully concentrated, actively engaged in what they are doing, groups of neurons in their prefrontal cortex fire with a frequency of 13 to 30 times per second. Beta waves were considered the fastest cycles of synchronized brain activity before an even faster gamma frequency band was discovered.

Throughout the day when you’re mentally attentive and not sleeping, your brain emits beta waves. Because they increase when people are alert and drop down when they’re drowsy, beta waves are a sign of active brain activity. However, they are also linked with anxiety and stress – after all, your brain switches to higher activity whenever you’re afraid, angry or worried.

Working memory is a system in your brain that temporarily holds information, allowing you to use it without losing track of what you’re doing. It comes in handy when you receive new data and need to connect it with other information already stored in your mind, or works like a notebook of consciousness, holding information in your mind while you make a decision. Think about solving a mathematical formula: you won’t remember the numbers ten minutes later, but you need to store the numbers somewhere while looking for a solution.

Research shows that beta waves may be crucial for such mental operations. In one experiment, a group of animals were given a working memory task while the scientists recorded brain activity from their prefrontal cortex, which is the seat of working memory. The animals were presented with sets of objects, and they were trained to react when the subsequent sets matched. Imagine a sequence of A and B objects. Another set of AB would be a match, but not BA, AC, or CA.

When the animals were presented with sequences to find a matching pair, their beta waves went way up when the first object shown was not a match for the target sequence. Beta rhythms served to clear working memory, because the animal already knew that the whole sequence would not be a match. Choosing what to think about

Other studies have demonstrated that beta frequency may be used by the brain to switch between pieces of information stored in working memory.

A team of scientists from MIT asked a group of participants to perform a memory task while they monitored their brainwaves. The task involved holding a series of numbers in mind for a short period of time. The researchers observed that the participants’ brains used beta waves to alternate between different chunks of data.

It seems that beta frequency acts as a gate which determines when information held in working memory is either read out, or cleared leaving space for you to think about something else.

As the author of the study Mikael Lundqvist has put it:

“The beta rhythm acts like a brake, controlling when to express information held in working memory and allow it to influence behavior,”

When you are holding a piece of information in working memory, it feels as if it is stable, as if it is there all the time. Scientists used to believe that this must be supported by steady neuronal firing, a constant activity which represents the thought. Research with beta waves shows that working memory may be supported by brief spikes of neural activity controlled by beta waves, rather than continuous firing. In other words, our memories are “blinking in and out of existence”.

As you can see, beta waves regulate a lot of what happens in your mind, moment to moment. They also serve to control what you think about, being associated with the top-down control of attention. 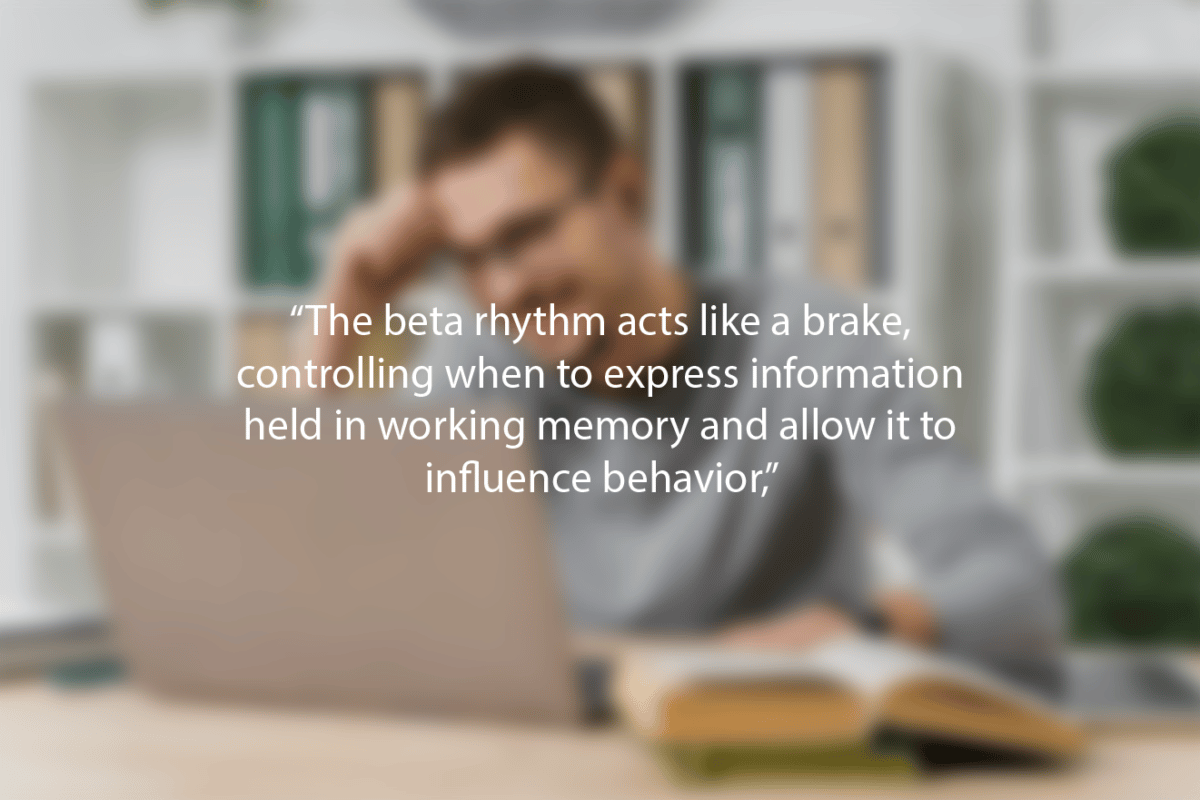 What does it mean?

Your attention could be driven from two directions. If you hear a sudden noise in the corner of your room, your focus will be immediately drawn towards it. Scientists call it the bottom- up attention: the peripheral (bottom) endings of your senses drive your focus.

But when you actively choose to think about something, for example while reading this text, the top down attention kicks in. This is when beta waves come into play. They serve as a control mechanism over conscious thought. Out of all the pieces of information you hold in your working memory, which of them will be read out is determined by beta waves.

If beta is so important for focused cognition, what would happen if you increase that bandwidth? As you might have expected, a higher amount of beta waves is correlated with better cognitive capacity. Several research studies have shown that tapping into beta can stimulate concentration or learning skills.

How to induce beta? There are a couple of ways.

One of them is to use “brain jogging”. It combines three elements: performing cognitive tasks, multitasking and physical activity. Several research studies found this mix to increase concentration skills, marked both by performance and an increase in beta bandwidth. There are several brain jogging programs available online, if you want to give it a try.

Other methods involve noninvasive stimulation of the brain to drive neural activity towards beta waves. If you use an Omnipemf device, you can either use a predefined program or choose a custom frequency. The program Enhance Mental Capacity uses beta waves to increase focus and productivity. When setting a custom frequency, choose one between 13 and 30 Hz. You can also stimulate the braiwaves towards beta frequency using binaural beats. Similar to brain stimulation using alternating magnetic fields as in the NeoRhythm band, binaural beats use sounds to drive brainwaves towards the desired frequency.
In this method, two slightly different rhythmic sounds are presented to both ears respectively. The method is based on the phenomenon of the brain perceiving the difference between the two tones coming to each ear. For instance, one ear hears a frequency o 215 Hz and the other 235 Hz. In effect, the brain is stimulated with the frequency of 20 Hz.