Every night when you take your well-deserved rest, your brain activity slows down. It becomes dominated by delta waves: slow synchronized firings of your neurons […]

Every night when you take your well-deserved rest, your brain activity slows down. It becomes dominated by delta waves: slow synchronized firings of your neurons which happen up to 4 times per second.

Your brain produces the biggest amounts of delta waves during deep sleep. Also called slow-wave sleep, this is the time when your body recharges its batteries. It recovers after everything that you’ve put it through during the day, gets rid of toxins, and synthesizes new cells. The same goes for your mind: slow-wave sleep is essential for memory consolidation. Delta waves play an important role in that… although different from what you might have expected. But we’ll cover that further down the road.
When the cruel scientists suppressed slow-wave sleep in a group of participants, they observed a range of negative effects. The treatment hampered the individuals’ mental skills and impaired their glucose metabolism, increasing the risk of type 2 diabetes.
On the other hand, studies that enhanced SWS observed better learning and health. This could be done by stimulating the brain to produce delta waves. An increase in delta power has positive effects on sleep while decreasing it is associated with insomnia or poorer sleep quality. 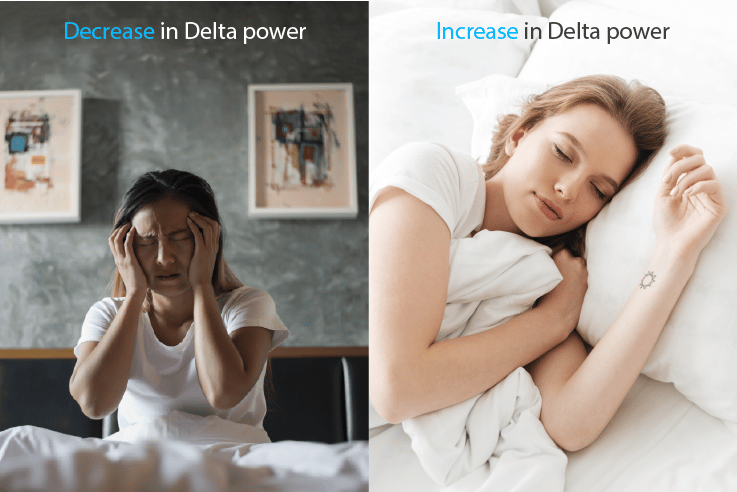 Usually, delta waves happen when you are unconscious, but not always. In some extraordinary conditions, delta oscillations occur in conscious subjects. This was observed for instance in people under the influence of potent psychedelic substances like DMT. What is interesting, delta power was correlated not only with the reported intensity of the state and experienced visuals. It was also linked with higher entropy: a measure of brainwave complexity. Brain signal entropy is often used as a landmark of low high conscious states. It sounds spooky, but the rule is rather simple: the more conscious a state is, the more complex is the brain activity. For example, during sleep entropy and complexity are low, but when you are conscious they rise, and become even more complex in “higher states”.

Observing delta oscillations in states that are highly conscious made scientists rethink their functions. Delta waves may sometimes be a sign of sensory disconnect rather than unconsciousness. It may be the case that both in dreams and in drug-induced dreamlike states delta oscillations may facilitate a condition when the brain is disconnected from the sensory input from the environment, yet its association cortex remains active.

Slowing down… even more

It was a well-known fact that slow-wave sleep is crucial for memory retention. Whatever useful new stuff you learn throughout the day, you need to sleep over it to make it stick (that’s why pulling an all-nighter while cramming for an exam may not be your best choice). The same neurons which were active during the initial experience are reactivated during sleep to consolidate this memory trace in the brain.

Before we explore the relationship between brainwaves and the memory consolidation process, I need to clarify one common misunderstanding.
You might have been told many times that delta are the slowest frequency brainwaves.

Truth be told… they’re not.

For a long time, delta waves were believed to be the slowest pattern of brainwave activity. This was due to the frequency filters used during EEG procedures: to avoid noise in the signal, a cut-off filter of 1 Hz was commonly used. 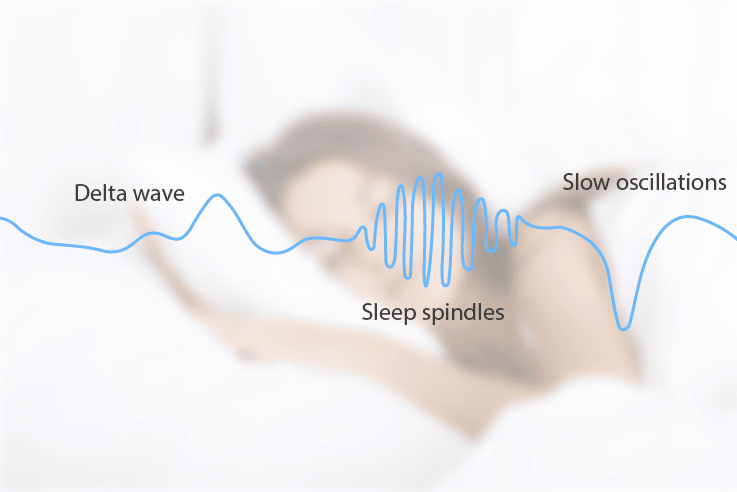 A group of researchers from San Francisco decided to explore the functions of delta waves and slow oscillations. They used a group of genetically modified rats. Thanks to the alterations, the scientists could tweak the animals’ brainwaves by precisely stimulating neurons with light. This way, they could suppress either slow oscillations or delta waves.

Firstly the lab rats were trained in a new motor skill. Then when the animals were sleeping, the researchers messed with their brainwaves. When slow oscillations were suppressed, the next day rats’ performance was poor, as the animals were unable to properly integrate the training. This was an expected result: as we mentioned, slow oscillations coupling with spindles are key to learning.

But then the research team disrupted delta waves. As a result, the rats’ memories… improved. When delta activity was suppressed, reactivation of the task-related neural activity was stronger, and rats performed better when they woke up.

However strange it may sound, when it comes to memory, remembering is only one side of the coin. The other, equally important, is forgetting. It serves to unclutter the mind by eliminating unimportant information. By weakening the memory pathways which are unnecessary, the vital ones could get strengthened.

The key to proper memory processes is the balance between slow oscillations and delta waves. It all makes sense when we look at brainwave patterns in common diseases. Delta waves are linked to dementia, and they proliferate in Alzheimer’s disease, to the point when they permeate the brain activity also during wakefulness.

What happens if we induce delta?

A team of scientists from Germany thoroughly examined the effects of impulse magnetic field therapy for insomnia. Throughout four weeks participants received either magnetic stimulation in delta wave frequency or sham placebo treatment in the control group. Among those who received real treatment, the vast majority (70%) reported that their problems with sleep were reduced or disappeared completely.

The same delta frequency is used in Omnipemf’s PEMF devices. No matter if you suffer from difficulties with sleeping or you just want to make the most of your bedtime, if you want to use Neorhythm to improve sleep just choose the predefined setting in the app.

A promising area of brainwave induction is tackling not only delta, but also slow oscillations. Several research experiments used less than 1 Hz frequency stimulation with either sound tones or weak electric currents. The treated participants not only slept better than the controls, but also their memories improved.