When you think about Yoga, a clear image comes to your mind: dynamic stretching, the smell of incense, Indian music, and a thriving business selling mats, cork bricks, belts, and other utensils that assist in putting your body in the most uncomfortable positions.

What if I told you that the original Yoga had nothing to do with this pop-spiritual, McMindfulness stretching trend? In fact, practicing body postures was merely a means to develop greater focus and awareness.

If you want a simple answer, Yoga is an ancient mystical tradition that originated in India. At first glance, mysticism may seem similar to religion, as it seeks to attain higher truth or getting in contact with the more spiritual aspects of life. The way it is different from religion, though, is in that it aims to attain a first-hand, personal experience, rather than to follow dogmas or adhere to social hierarchies.

Renee Weber compared mysticism to science in a simple yet elegant metaphor: science is external empiricism, and mysticism is internal empiricism. While science develops tools and methods to gauge and examine the physical world, mysticism aims within, using methods of introspection to understand the mind.

In most religions in the world, there were people who didn’t want to follow the crowd but strived to get a hands-on experience of being in contact with some deeper aspects of life. They wanted to feel and understand, rather than just believe. Christians had Gnostics, Islam has its Sufi, Jewish had their Qabbalah. Hinduism had Yoga. In all these traditions, the idea of mental and spiritual development was similar. Yoga just happened to have a really well-explained “how to” section.

In other words, Yoga was practical. It could be described as a technique for gaining control over the mind. The basic principles of Yoga were laid out by an ancient sage Patanjali, who gathered the existing knowledge about the Yogic practice and summarized it in a concise treaty. According to him, Yoga is the “stopping of the fluctuations of the mind”.

What does it mean?

Let’s leave history aside for a moment and concentrate on science. The best way to explain Yoga is to present it as a solution to a universal problem: the chaotic nature of our minds.

The problems with concentration many people experience today are nothing new. It is natural for our minds to be in constant motion. After all, our brains are organs that evolved to solve problems. When there are no actual problems to ponder on, the brain comes up with new ones to keep itself busy. That’s why our thoughts so often revolve around worrying about the future or chewing through old troubles over and over again. Old Indian texts often compare the mind to a restless monkey, jumping from one tree to another from dawn till dusk. The aim of Yogic practice was to counteract this tendency.

The problem identified by Yoga was simple: we can’t see the real nature of ourselves and the world around us, because our thoughts cloud our judgment. We live in an illusion, seeing the world through a filter of unconscious fears, preconceptions, and biases. We are unable to experience reality as it is, perceiving only an image of it distorted by emotions and beliefs. This view of human cognition may sound grim, but it is shared by modern psychology and neuroscience which posit that human perception is like a hallucination guided by implicit expectations.

What’s the solution? The one offered by Yoga is based on developing greater focus and awareness. To get closer to objective knowledge, we need to refine our minds. To get control over thoughts, rather than be guided by them.

Once again a comparison with science comes in handy. Science develops more and more precise tools to measure the observable, material world and infer truth. Similarly, Yoga is based on developing the ultimate tool of cognition: the human mind.

In this way, the practice of Yoga was also about liberation: through changing the mind to see and understand more, the practitioner would be able to free himself from the shortcomings of his mind, from the enslavement of spontaneous emotions driving his thoughts and behavior. Therefore, Yoga was also a way of reaching happiness.

So what about the postures?

If Yoga is about balancing the mind, then what are all these physical exercises for? Why do you need to tear your hamstrings, work the way through sweat and pain to stay in awkward poses, and leave every class with sore muscles?

Physical postures, called asanas, were primarily invented to prepare the body for spiritual and mental practice. It’s not easy to focus on your breath or observe your thoughts when your back is aching. Stretching and strengthening the body was not aimed to develop physical fitness for the sake of it, but to ensure that bodily limitations are not a hindrance in the long and demanding meditative practice. Through practicing asanas, the yoga adept would get healthy enough to be able to focus on more important things, and his meditation was undisturbed by pain or illness.

With time, Yogis noticed that through the control over body and breath, one can gain better control of the mind. Your bodily condition is inherently linked to your mental state. The mind and the body are like connected mechanisms. When one of them is agitated, the other one follows. When one of them becomes relaxed, this also calms the other. To achieve a balanced state of mind, first, the body needs to be balanced. This was the rationale behind Hatha Yoga, a branch that appeared around medieval times. It was when the asanas and breathing exercises began to be used as a kind of mental practice in themselves.

If the goal of physical practices in Yoga was to get better control over the mind, then why do we witness such popularity of physical Yoga nowadays? The Western world just took what was most useful and grew a multimillion-dollar business out of it. Yoga postures turned out to be especially effective to counteract the civilization problem with a sedentary lifestyle, providing people with comprehensive training that could save their spines from falling apart. 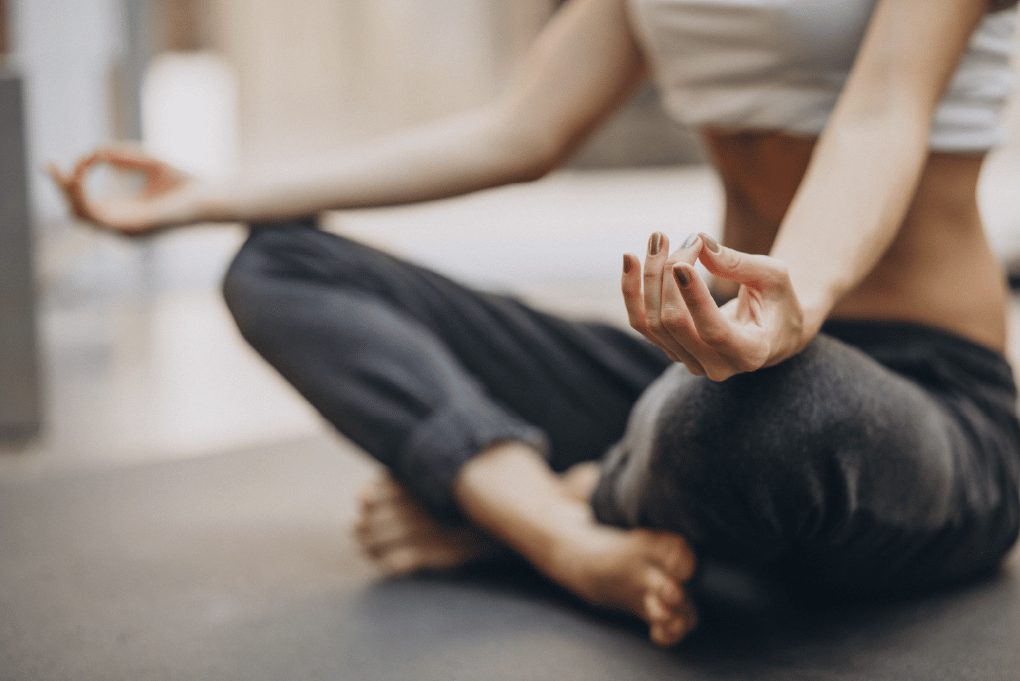 It only counts if your mind is there

With growing interest in meditation throughout the last decade, the spiritual roots of Yoga began to be discovered anew. It is worth remembering that the key difference between Yoga and ordinary fitness exercises is that Yoga should be performed mindfully. While doing it, you should stay focused and aware of your body and how the practice affects it.

Of course, it is easier said than done. What stands in the way is the mind drifting away. Quite often it won’t just rest and settle. If you want to boost your practice, consider using neurostimulation. Neorhythm contains six different programs designed for meditation. You can use them either to increase your focus while you practice more demanding positions or to soothe your body and mind during a calm, restorative practice.

Weber Renée. 19901986. Dialogues with Scientists and Sages : The Search for Unity. London: Arkana.

Mateusz Konopacki specializes in Psychology and Cognitive Science. He is an author of multiple courses and articles, as well as research on meditation and shamanic drumming. At the time when he is not explaining science to people,
he is a screenwriter and a Yoga teacher.